I am now 3 weeks in to a 7 week Uruguayan research and teaching trip.  While I had planned to update the events of the trip weekly, it wasn’t to be. My hosts Luis, Mariángeles, Marcos and Carmen have planned a very busy schedule. I’ll sum up the past three weeks here. Saturday, May 19 through Wednesday, May 23 was spent in Montevideo. I had some jetlag recovery time before visiting Carmen Viera’s lab at the Universidad de la República and giving a seminar on spider silk research on Tuesday May 22. After the seminar Carmen and I spent about an hour chatting with Leo Lagos a Science Reporter for the Newspaper la Diara (Cientia). We discussed a lot of things related to spiders and spider silk but the focus seemed primarily on the local invasion by the Australian house spider, Badumna longiqua. There is obviously a lot of interest in these. Indeed, the presence of these spiders across urban environments in Uruguay is very obvious. On Wednesday May 23 I visited the Laboratorio Ecología del Comportamiento in Montevideo, where Carmen showed me the local Alenosemus vierae colonies and the impact of the invasive Badumna longiqua on them. This followed with discussions with some chemists and microbiologists at the institute on silk projects and various lab tours.

On the afternoon of Wednesday, May 23, I took a bus to Trentia y Tres, a quiet town in central Uruguay. Here I visited Luis Fernando Garcia’s lab at the Ciencias Biológicas PEDECIBA. Being in the middle of the agricultural region, Luis’s institute is primarily dedicated to agricultural research. I had a chance to visit some farms and search out spiders on a cattle farm and in rice and corn crops, finding mostly small, non-web building individuals. For someone searching for silks this is disappointing, but Luis is keen to extract enough silk from the jumping spiders to perform an NMR analysis. I have estimated over 1000 individuals will be needed. He is keen to get there nonetheless. I’ll let you know how he goes. The last trip in Trientia y Tres was to a rugged pristine countryside about an hour from the city. Here we made some really interesting collections. In particular there was an abundance of large retreat building Mygalomorphs at the site. We collected around 10 and have them now building retreats in the lab at Rivera.

By May 31 we moved to Rivera on the Brazilian border, where I have since been preparing for the upcoming lectures I will give on spiders and silks to graduate students of the Centro Universitario de Rivera, Universidad de la República in Rivera. As part of this preparation we had tried out some of the practical activities I was proposing to do including degumming silkworm cocoons using readily available household products, and a rudimentary method for spinning fibres from Bovine Serum Albumin. Both of which surprisingly worked very well. As we were disappointed in the number of orb weavers collected in Trietia y Tres, and those that we had were not building webs in the frames we had provided, we ran a collecting trip on the outskirts of Rivera, but returned few large orb weavers, only a lot more jumping spiders for Luis to silk. Interestingly, the web building wolf spiders, Agloactenus logotis were in abundance so I took an opportunity to photograph them and their webs, see below, in light of our writing an upcoming ‘news’ article on them (for the Science Breaker) to support the release of our joint publication on them in the Journal of Evolutionary Biology.

I’ll try to now update this in one week. Chow. 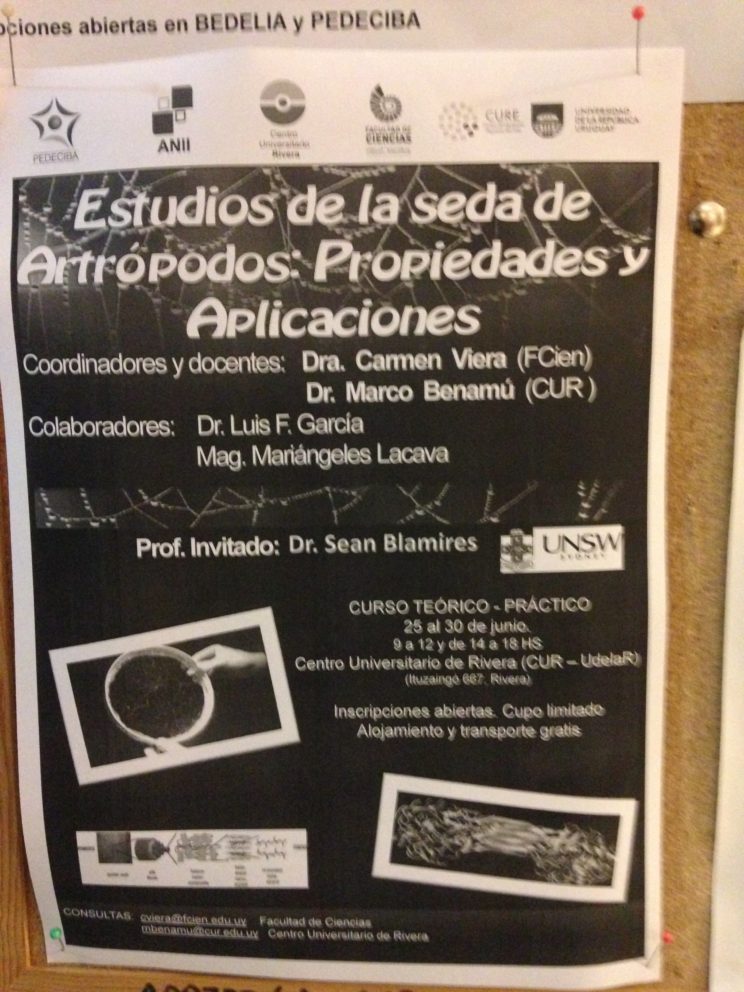